Be Careful What You Wish For

Be Careful What You Wish For is the 16th episode of Season 2 of Dawson's Creek.

SINGIN' THE BLUES – On the eve of Dawson's sixteenth birthday, Dawson (James Van Der Beek), Pacey (Joshua Jackson) and Andie (Meredith Monroe) follow her therapist's advice and throw themselves into an unabashed night of recklessness and the blues. Meanwhile, back at the Leery house, Joey (Katie Holmes) is organizing a surprise party for Dawson, but the longer the guest of honor is a no show, the more she is subject to surprises of her own; Jen (Michelle Williams) and Ty (guest star Eddie Mills) face up to the their potentially irreconcilable differences; and Gale (Mary Margaret Humes) and Mitch (John Wesley Shipp) come to decisions about how to raise their son in light of their separation.

My name is Dawson Leery
I'm feeling kinda weary
Today is my birthday
And you all look a little blurry
The girl that I cared for left me and ran away
Straight into the arms of a guy who turned out to be gay
I got the blues
Yeah today I woke up feel like I was born to lose
Yeah I got the blues
Somedays you were born to lose
Here's my friend Andie she's gonna sing a song cause she's got the blues go!

My name is Andie
And my brother's the one who's gay
My other brother died
And my daddy ran away
But I'm still Andie
And my boyfriend makes me randy
His name is Pacey
And my mom's gone completely crazy!
I got the blues
Dawson – That's right you sing it sister!
Andie – Yeah! Sometimes you swear you were born to lose!

We got the blues
Now it's time to put on my dancin' shoes
(guitar solo)
Alright, I been restless
Hopeless and confused
This girl that I told you about
She's been on the move
She's at my surprise party
Where everyone I know is right now
When I show up late there
They're all gonna have a cow
Yeah I got the blues
Swear sometimes you were born to lose
Andie: No brother man we got the blues!

❝ This is Jack McPhee, Capeside's no-longer-ambiguous resident ❞
—Abby to her friends

❝ Yeah well you know, I'd take that as a compliment if it wasn't coming from Satan! ❞
—Jack to Abby

❝ When I kissed you tonight, that wasn't my desire for something more, it was for something pure, something that I haven't felt in a long time, but you ruined that ❞
—Jen to Ty

truth of our time | CHICKENPOX
gail and mitch discuss the gift 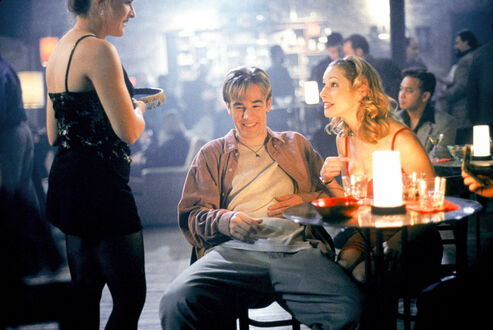 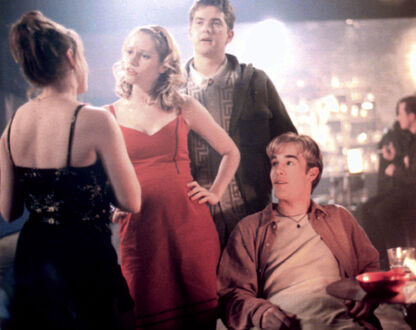 Add a photo to this gallery

Retrieved from "https://dawsonscreek.fandom.com/wiki/Be_Careful_What_You_Wish_For?oldid=21910"
Community content is available under CC-BY-SA unless otherwise noted.