View source
watch 02:56
Doctor Strange in The Multiverse o Madness - The Loop
Do you like this video?
Play Sound
This article needs to be completed. Please help Dawson's Creek Wiki by adding information.

Best friends (consider each other soulmates)

1st – Joey felt without identity in their relationship
2nd – Dawson discovered that Mike Potter was dealing drugs and Joey blamed Dawson for her father's re-incarceration
3rd – They were getting together, but when Mitch died it changed everything
4th – Joey finds out that Dawson was seeing someone in L.A. that he hadn't broken up with when they slept together

Thank you. For being my friend, for understanding me better than anyone, and for putting up with me for the last 16 years. I love you
—Joey[src]

Dawson and Joey meet as children[1] and with Joey's family on shaky ground, she turns to Dawson's and is almost like a part of it by the time they turn 15. At this age, however, Dawson and Joey are never really friends as Joey hides an insatiable crush on Dawson[2] which informs all of their interactions, including Dawson's romance with Jen, over which Joey is a looming presence as Dawson, albeit unaware, feels the same. On the surface, Dawson struggles to keep their friendship the same and Joey, too, is worried that everything will change between them, perhaps even more so because of her relationship with Dawson's family. They briefly suffer a rift in their friendship when Dawson discovers that his mother's cheating on his father. Joey tries to console Dawson, but when he finds out that she knew he feels betrayed.[3]

Once the hurricane hits Capeside, everyone (save for Pacey) gather at the Leery house to ride out the storm, including Joey, Jen and Mrs. Ryan. Joey's tried to apologise to Dawson, but Dawson's in over his head with his family troubles and doesn't want to hear it. When Gale tells Mitch the truth during the hurricane, Dawson feels like everything is falling apart and inadvertently lashes out a Jen. Joey helps Jen and later Dawson apologises to Joey, too, after she tells him that he has it pretty easy, considering that his Mom is still alive.[4] When they both end up in Saturday detention, along with Jen, Pacey and Abby Morgan, Joey's discomfort with seeing Dawson and Jen together only grows, while Dawson's concerned that he has to compete with Pacey for Jen's affections. Abby starts a game of truth or dare, and Joey decides to join in. When Jen is dared to kiss Pacey, Joey's thrilled at the notion that it could separate Dawson and Jen, telling Pacey that he has to follow the rules. To get back at Joey, Pacey dares her to kiss Dawson. Joey protests as she's scared, and Dawson's just annoyed at first, but they go ahead. They share their first kiss and it's full-on, intense and they're both swept up in it. Abby counts to ten, but they only break apart once Jen says something.

Afterwards, Joey's on cloud nine, but is coaxed out rudely by Abby to challenge Jen. Joey challenges whether Jen is most attracted to Dawson of all the guys at school and they argue, with Dawson caught in the middle. When Dawson later fights Pacey at basketball, the girls watch and Abby decides to voice the elephant in the room. She leaves so that Jen and Joey can talk things out, but Joey's unwilling, although she implicitly admits that Abby is right. At the end of their detention, Dawson and Jen make up and Joey's heart aches, leading her to almost telling Dawson how she feels, but she's interrupted.[5] Pacey constantly tries to get Dawson to realise that he returns Joey's romantic feelings[6][7], but not until Dawson sees Joey competing in a beauty pageant do they surface.[8] Joey rejects Dawson's newfound interest in her as superficial, but their relationship is altered from this point onwards. Dawson struggles with changing his relationship with Joey and is unable to tell her how he feels, but ultimately, when faced with her walking away, he kisses her.[9]

After their kiss, Joey worries that Dawson will somehow regret, but is relieved when he asks her out on their first real date. Dawson sails over to Joey's and picks her a daisy. They're both nerve-wracked over this change in their relationship, putting a lot of weight on their interactions, which leads Joey to fear the worst when Jen (unknowingly) interrupts their date. Dawson is overwhelmed trying to balance his nervousness over his and Joey's beginnings with Jen's unhappiness and need for support. Dawson ultimately leaves Jen in a lurch and goes to find Joey at the water. They seal their new romance with a second kiss at the swing set.[10]

Joey starts to feel nervous when Dawson assumes he knows everything about her. They have their first big fight when Dawson reads Joey's diary. He focuses on the fact that she derided his talent as a filmmaker, but not the fact that he violated her privacy. They eventually make up and find each other at Pacey's dock birthday party, where they kiss in the rain.[11] After this, they're happy to be together and enjoy their relationship. Jen amps up her efforts to win Dawson back, but he's more irritated than anything and Joey's a bit nonchalant, not feeling threatened. Dawson ends up having to definitively reject Jen's advances.[12] Joey starts delving into art and realises that she feels her identity revolves around only Dawson. He doesn't understand her feelings, as she has trouble expressing them to him, and lashes out, feeling he might lose her, which was his worry before their kiss.[13] The marital difficulties of his parents put Dawson unfairly in the middle and he is comforted by an increasingly conflicted Joey, who's not sure about their relationship.[14], while being swept up in the new status quo of his closest relationship. Joey's concerns become explicit when she and Jack kiss and Dawson finds out at a dance, which leads Joey to break up with Dawson after they say 'I love you' for the first time.[15]

Following their break-up, Joey wants to be friends again, while Dawson is devastated and angry with her for demanding a friendship.[16] Joey starts spending time with Jack, while Dawson joins Jen on her party circuit. Dawson treats Jack like a rival, but Dawson and Joey mostly just try to take a break from each other.[17] Joey tentatively starts dating Jack, while Dawson feels drawn to Jen who is there for him during his parents' separation.[18] Their linger feelings for each other put a break on those connections, however, as Joey and Dawson square off in front of everyone about their sex lives.[19] Dawson resolves to make a film about his relationship with Joey as catharsis, although it doesn't bring him any and only puts Joey's private life uncomfortably on display for everyone to see.[20]

Dawson switches gears after realising the impact of his film and is more civil towards Jack, and Joey's relationship with him. When Jack suffers harassment at school and comes out, Dawson is there for Joey as emotional support and comforts her after her break-up.[21] While Joey is reeling, Dawson makes the mistake of assuming they will reunite and his birthday blues leads to a drunken, public declaration of frustration with Joey's reasons for not being with him. In spite of this, Joey forgives Dawson while she is still trying to cope with the aftermath of her break-up with Jack.[22] Dawson feels simultaneously emotionally and creatively destroyed when his film is trashed by a guest lecturer and he thinks Jack has replaced him as Joey's close relationship and soulmate.[23]

But when Joey's Dad returns to her life, Jack is the one to intimate that Joey needs Dawson's support in this situation more than anyone else's and that Dawson should try his hardest to make space for Joey to let him. With Jack's help, Dawson is emboldened to break through Joey's guards to truly be there for her and assuage her fears. This takes place during a waiting the The Icehouse is catering, where they work as wait staff and following a successful evening, they dance with their parents. Joey's Dad smartly asks Gale to dance to give Dawson and Joey a moment together. Relieved, Dawson and Joey dance and Joey thanks Dawson. There's a moment and they share a kiss, reuniting. After the wedding, they head back to Dawson's room, indicating that they're going to have sex, but find a heartbroken, shivering Jen who tells them that Abby died.[24]

Abby's death brings up unresolved grief with Joey, who was never allowed the space to properly deal with her mother's death. Dawson supports her and together they visit the gravesite for Joey's mother, where she has never been. She lays a flower and cries while Dawson holds her.[25] A month passes and, after everything, Dawson and Joey are relieved to finally be together. Dawson wants to do something surprising and different for their 1-month anniversary and surprises Joey by taking her to a French restaurant. Unfortunately, a comedy of errors ensues when the restaurant mixed up their reservation with Mitch's, who's there with their film teacher whom Dawson can't stand. Dawson and Joey get seated with them as the restaurant is full and Joey stands up for Dawson, interrogating Ms. Kennedy on why she claims Dawson is such a hack of a film maker.[26]

She's great. I mean, she's smart, she's beautiful, she's funny, she's a big ol' scaredy cat. If you creep up from behind her she'll jump out of her skin. It's pretty amusing. She's honest. She always calls them just like she sees them. You can always count on getting the truth from Joey even if the truth hurts. She's stubborn. We fight a lot. She can be so frustrating sometimes. But she's a really, really, good friend. I know her to a fault. She believes in me. And I'm a dreamer so it's so good to have somebody like that in my life. If she goes away, I don't know what I'm going to do. I mean, she's my best friend, you know? She's more than that. She's everything
—Dawson

You're what I'm going to want, Dawson
—Joey[src]

Joey, for these past three years you have been so unbelievably strong
—Dawson[src]

You think every Joey has a Dawson, and every Dawson has a Joey?
—Joey[src]

Dawson – Jo, you're not a bad friend. I don't get to say it much anymore, but... you're my best friend. You always were. No matter where you are, no matter where your life may take you, and no matter who you're with...
Joey – You'll always have a piece of my heart
―Four Stories

A couple of years ago, if you would have asked me who the first person I was going to have sex with was, I would have answered unequivocally: Dawson Leery, that's who. The possibility of sleeping with anyone else hadn't even occurred to me
—Joey[src]

Jo, all the pain I've watched you go through, I've never been able to fix it before. And this I can fix. All I need you to do is let me
—Dawson[src]

out of my head | FASTBALL
waking up the next morning

have a little faith in me | JOHN HIATT
swing set kiss

you get what you give | NEW RADICALS
walking in the rain

i do | JUDE
dawson's video present

i believe | KIND OF BLUE
dawson and joey dance at prom 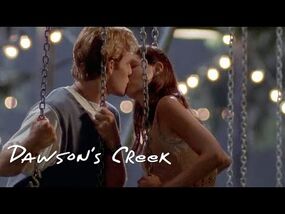 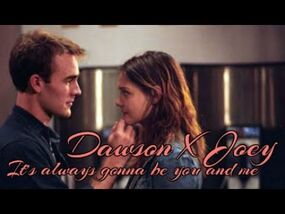 FANSITES
Dawson And Joey ~ True Love On The Creek