View source
watch 01:36
We're Getting Mutants in the MCU - The Loop
Do you like this video?
Play Sound

If Jack is gay, he does not need your judgement, young man. The Lord above will be the one to judge him, as He will all of us. What he needs from you, from me, from everyone else in this world is love and tolerance. If anything, that boy must feel scared and alone, and he will need the understanding of his fellow man to help him through this. Let's save judgement for someone much more experienced than you
—Grams to Ty[src]

Evelyn 'Grams' Ryan is a principal character on Dawson's Creek. She is portrayed by Mary Beth Peil.

Evelyn 'Grams' Ryan is the maternal grandmother of central character Jen Lindley . Grams was introduced in the Pilot episode of the show, and is shown to have deep religious beliefs, often coming into conflict with Jen because of this. She and her husband have one daughter, Jen's mother Helen, although the two are not close and see little of each other.

Ryan worked as a nurse for many years, but retired several years before Jen (who leaves her home town of New York City to escape personal troubles) moves in with her. Grams has two granddaughters, Jen Lindley and Eve Whitman (the latter having been given up for adoption at birth), and one great-granddaughter, Amy Lindley, daughter of Jen.

In the Pilot episode of season one, Grams is seen only briefly. Over breakfast on Jen's first day at Capeside High School, she tells her to stay away from the boy next door, Dawson Leery , stating that he and his best friend, Joey Potter , have been sharing a bed for years, and that they are the wrong kind of influence on Jen. She later despairs of Jen when she begins to date Dawson. Grams alludes to Jen having problems in New York, but doesn't specify what they were (Jen later reveals that her problems were related to sex, drugs and alcohol).

Early on in the season, it is shown that Grams is caring for her husband, who is in a coma at home after suffering a stroke. During a hurricane, Grams and several other characters gather together for safety in the Leery house, during which Grams has an argument with Joey's sister Bessie . Bessie is unmarried and pregnant and her boyfriend is black, both points of which Grams objects to (although she states what she objects to most is "children having children"). Later in the season, Grams ends up delivering Bessie's baby, a son named Alexander, after it is realised she is the only person nearby who has medical knowledge. At the end of the season, her husband wakes from his coma briefly, but suffers another stroke shortly afterward and dies in the final episode of the season.

Grams begins the second season in mourning for her husband. She attends the final screening at the Rialto cinema in tribute to him, as they had their first date there several decades earlier. She also attempts to help Dawson's mother Gale , who is having marital difficulties with her husband Mitch , by suggesting they renew their wedding vows. After Jen's break-up with Dawson, Grams becomes worried about her granddaughter, as she starts drinking heavily and associates herself with unsuitable men, one of which Grams is forced to throw out of her house one evening. She is also wary of Jen's new friendship with Abby Morgan , later remarking that she felt the student was "mocking" her. Grams and Jen clash frequently during the season, with Jen feeling judged by her grandmother, and Grams despairing that Jen constantly defies her rules and guidance.

Grams attempts to go on a date in the second half of the season, showing that she may be ready to move on after the death of her husband, but the evening goes awry when it is revealed that the man is married. She later helps out on the set of Dawson's movie, providing catering. Grams relationship with Jen is shattered towards the end of the season when Jen's friend Abby dies. Grams attends the funeral in a gesture of support for Jen, but when Jen makes a speech denouncing religious faith and saying that Abby had a "toxic personality" (both in front of Abby's parents), Grams walks out of the church to go home, later telling Jen she is no longer welcome in the house. At the end of the season, Grams and Jen reconcile and Jen moves back in, along with her new best friend Jack McPhee , who has had to leave his family home due to conflict with his father over his homosexuality.

Grams's nature softens in season three and she appears to be far more tolerant than before. At the beginning of the season, she is living in her house with Jen and Jack. Grams is pleased to have Jack living with her, later telling him that he is making Jen happier than she has been in a long time. During the season, Grams hosts a Thanksgiving meal for members of her church group, but also invites Jen's friends (Pacey Witter , Joey and Dawson), as well as Dawson's parents, who use the opportunity to tell their son that their divorce has come through. Jack and his sister Andie also later attend, after their father is unable to come home from work to spend time with them. Earlier in the day, Helen Lindley unexpectedly arrives at the house to spend time with her mother and daughter.

During the day, it is revealed that new character, Eve Whitman, is actually the biological daughter of Helen, making her Jen's sister, and the granddaughter of Grams. While Jen finds out about her half-sister (who was given up for adoption at birth), it is not clear whether Grams is told, or whether either of them discover that the baby grew up to be Eve. By the evening, the familial relationships are greatly improved and Helen departs on good terms with both Grams and Jen. Later in the season, Grams spends time at the Potter house, to support them when they open a new (and so far struggling) Bed and Breakfast business. During this episode, Jack moves out and goes back to live with Andie in their family home. Grams is instrumental in the love lives of both Jack and Jen towards the end of the season, encouraging Jen to follow her boyfriend Henry and make up with him before he leaves for summer camp, and inspiring Jack to finally kiss Ethan, the boy he likes and whom he took to the junior prom.

During this season, Grams strikes up an unlikely friendship (with romantic undertones) with Arthur Brooks , an elderly man who lives on the outskirts of town. She comes into contact with Brooks after Dawson steals his boat to rescue Jen and Pacey, who have been stranded on Pacey's boat in the middle of a storm. Jen's brush with disaster makes Grams question her faith, but Jen reassures her and they go home together. Jen and Grams later argue over Jen's apparent involvement in the ecstasy scandal that put Andie in hospital, and they cease talking to each other for a while.

When Grams discovers that Jen has not completed her applications for university the following year, she and Jack team up to complete them for her. Grams realises that the reason Jen has not filled in the forms is that she doesn't want to ask her parents for help. Grams promises to help Jen herself. After this, Jen and Grams are close once again. Later in the season, Grams finds out that Arthur is terminally ill. They spend many hours together before he dies. Towards the end of the season, Grams sells her house and makes plans to move with Jen to Boston, where she and Jack will be attending university together.

Grams is now living in Boston with Jen and Jack. Shortly after the beginning of the season, she ends up temporarily taking in Dawson, who has decided that living in Los Angeles and studying at USC is not for him. Grams, along with all the main characters, returns briefly to Capeside to attend the funeral of Dawson's father Mitch, who was killed in a late night car accident. Later in the season, she returns once more, for the first birthday party of Dawson's baby sister, Lily. Towards the end of the season, Grams begins to date an African-American man named Clifton Smalls, shocking Jen because of his ethnicity and the fact that he is of a different religion than Grams. In the last episode, Grams and Clifton take an impromptu short break to Las Vegas without Jen's knowledge.

During the final season, Grams and Clifton split up, with Grams explaining it is because he asked her to convert to his religion. Later, Grams goes on a date with Bill, the uncle of CJ, Jen's boyfriend. She breaks up with him abruptly, but subsequently reveals to Jen it is because she has been diagnosed with breast cancer. Jen calls her mother (who had finally separated from Jen's father) and asks her to visit. She doesn't tell her about the cancer, but when Bill storms in when Helen is at the house, he inadvertently drops the bombshell. After discussing the situation, it is decided that Grams (along with Jen and Jack) will move to New York City to live with Helen in order to be near to a good hospital for treatment.

In the season finale, the action skips forward five years. Grams is living with (or close to) Jen, and her baby daughter Amy. Jen implies in conversation with Joey that Grams is still ill, but it is not revealed to what extent. Midway through the episode, at Gale's wedding, Jen collapses, and it is revealed by Grams that she is very ill with heart problems that were revealed during her pregnancy with Amy. It becomes clear that Jen will not survive and Grams spends much of the episode at her bedside. Jen and Grams decide that after Jen dies, Jack will take custody of Amy, and after the funeral, Jack and Grams are seen sitting at a table together, playing with Amy. 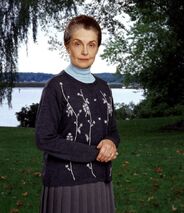 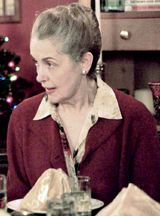