You know, I think for the longest time, I was just waiting to find somebody I loved as much as I loved you. I realize that's not gonna happen, you know. You were my first love
—Dawson, to Joey

Promicide is the 20th episode of Season 4 of Dawson's Creek.

SENIOR PROM — Pacey (Joshua Jackson) feels out of place at the prom and lets out his frustrations about life on Joey (Katie Holmes). Gretchen (Sasha Alexander) and Dawson (James Van Der Beek) discuss the future of their relationship. Jen (Michelle Williams), is reeling from her recent confrontation with her father and plans to get drunk. Jack (Kerr Smith) and Tobey (David Monahan) attend together with coaxing from Jen.

I don't think I'll ever love anyone the way that I loved you, either. And that's a good and a bad thing
—Joey to Dawson

You know what? It's the strangest thing, but ever since I got back from that trip with Doug, I've been feeling...really angry. But not angry at myself. It's actually worse than that. I've been feeling really angry at Joey. And I don't know why I'm angry at Joey. And that makes me feel guilty, and then the guiltier that I feel, the angrier I get, and I still don't know what to do about it
—Pacey

You know what I actually realized when I saw the two of you dancing there together? That is the happiest I have seen you all night. I mean, I think it's actually the happiest I've seen you in weeks. You want to know what's worse than that? I don't care. I saw the two of you dancing together, and I just don't care. I'm not angry. I'm not jealous. I'm not upset. I'm really not much of anything
—Pacey after seeing Dawson and Joey

You know...last year...I felt like I could give you something that no one else could give you. I could give you that wall to paint your mural on. I could take you away on a sailboat for a summer. I could even give you that night in the ski lodge. But I don't feel like I have anything left to give you now, Jo. I guess I'm spent. I've become a man who hates himself so much he can't even look at his own reflection in the mirror, and I wish that I could tell you that being with you doesn't make that worse, but it does... because the more that you love me in spite of that, the angrier that I get at you... and the more that I stop loving you back
—Pacey to Joey

It’s not the most fun thing in the world, but I agreed to play this role, and [producer] Greg Berlanti does want to take it that far. That’s as far as I’m going to take it. I don’t think teenagers need to see two guys kissing on a weekly basis
—Kerr Smith[1]

you're an ocean | FASTBALL
prom dresses and tuxedos

roses around my feet | TISH HINOJOSA
dawson checks on joey 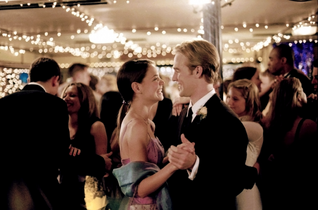 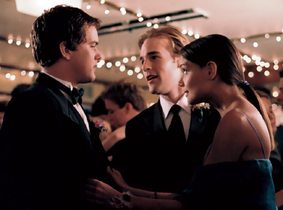 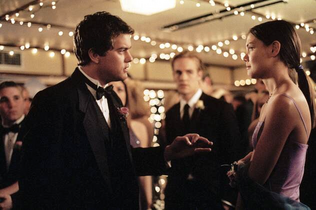 A gay kiss heats up "Dawson's Creek" (ENTERTAINMENT WEEKLY • MAY 2001)