Tamara Jacobs is a recurring character on Dawson's Creek. She is portrayed by Leann Hunley.

TAMARA JACOBS is a thirty-six year-old English teacher new to Capeside. She was born and raised in Manhattan. She lived, for awhile at least, on Christopher Street in Greenwich Village. Tamara married an abusive, dysfunctional stockbroker who didn't like her working. After the marriage fell apart, Tamara got back in touch with Benjamin Gold, an old friend from college who was teaching English and film studies in Capeside, a small town on Cape Cod. There was an opening in the English department there, and desperately needing a change, Tamara jumped at the opportunity. "Benji" helped her find a beach house rental in Capeside, Tamara moved in late in the summer, and excitedly looked forward to the start of the school year.

Tamara ventures into Screen Play Video and flirts with the teenage clerk while checking out "The Graduate." She is surprised to find out on the first Monday of school that the video store clerk is Pacey Witter, a student in her sophomore English class, and that he is taking her flirting very seriously. She and Benji go to the Rialto movie house that night to celebrate her first day of teaching. Pacey turns up at the movie, still heavily flirting, and ends up getting punched in the face by an angry movie-goer. Tamara apologizes to him later that night at the marina, and something about the fifteen year-old, who is acting so sure of himself, attracts her enough to passionately kiss him.[1] Pacey tries to talk to her about this during school, but she's too worried about perception and blows him off. The young guy proves persistent, showing up at the school dance she's chaperoning. After the dance, again at the marina, Tamara tries to explain to Pacey that the kiss was a mistake, but attraction wins out over discretion once more, and the two share another passionate kiss.[2] 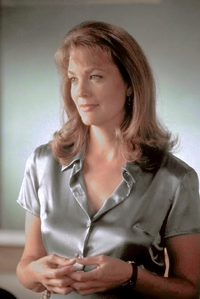 Tamara, surprised with herself and worried about the situation, tries to re-establish a teacher-only relationship by counseling Pacey about his below-average grades. She agrees to tutor him that night at school. Pacey continues to push for more in their physical relationship. Tamara decides to turn the tables on him and demands immediate sex right there in the classroom. Pacey's bravado falls apart and he admits his virginity to her. She sends him home. The whole situation is out-of-hand, which Tamara tells Pacey when he confronts her alone in the hallway the next day. Now completely sincere, he tells her how much he wants her. They sneak off to a deserted estate that evening and make love. Meanwhile, Tamara is also enjoying getting reacquainted with her old friend Benji, and spending time with him afterschool around Capeside.[3] Pacey confronts Tamara about this. She's amused by his youthful jealousy and discloses to him that Benji is gay, so there's no cause for concern on Pacey's part. Pacey seems to be holding up his end of the bargain and not discussing their relationship with anyone. They rendezvous at her house at night, and she finds his youthful eagerness sweet.[4] Tamara weathers out Hurricane Chris at her home with Pacey and his elder brother, Deputy Doug Witter, for companionship. The elder Witter brother also takes a liking to her, which is confusing since Pacey insists that Doug is gay. Not thrilled with being entangled in the Witter sibling rivalry, Tamara quickly nips in the bud a date with Doug, and again doubt gnaws at her about the relationship with Pacey, who admits to being in love with her.[5]

Fate intervenes before Tamara can take any action on her own: rumors about the affair between Pacey and the teacher quickly circulate through Capeside High. When Pacey comes to her home to apologize, anger is all she can feel for the loose-lipped guy, and she officially ends the relationship right then. Sure enough, the Capeside School Board gets wind of the story and calls a hearing. Tamara gets a lawyer, who intervenes when Pacey still attempts to apologize before the hearing. In one of the most tense moments of her life, Tamara is asked in front of the Board if there is any truth to the rumors. Before she can answer, Pacey interrupts and tells the Board that he made everything up in order to appear cool to his peers. The student proves to be a true gentleman. Tamara submits her resignation to the Board and calls her sister in Rochester to make sure she can quickly go there. Things got too intense too quickly in Capeside, and it was only due to the gallant gesture of Pacey that Tamarašs official reputation remained unsullied. She bids a tender farewell to her teenaged lover the night before she leaves for Rochester. Tamara leaves Capeside having opened up Pacey's world to much more than English literature. It is touching that the student was able in the end to give his teacher a lesson in grace under pressure.[6][7]

Retrieved from "https://dawsonscreek.fandom.com/wiki/Tamara_Jacobs?oldid=18665"
Community content is available under CC-BY-SA unless otherwise noted.